Urban extents and densities from NYU and Lincoln Institute of Land Policy’s “Atlas of Urban Expansion,” 2016. All cities are shown at equal scale and projected according to the city’s respective UTM zone 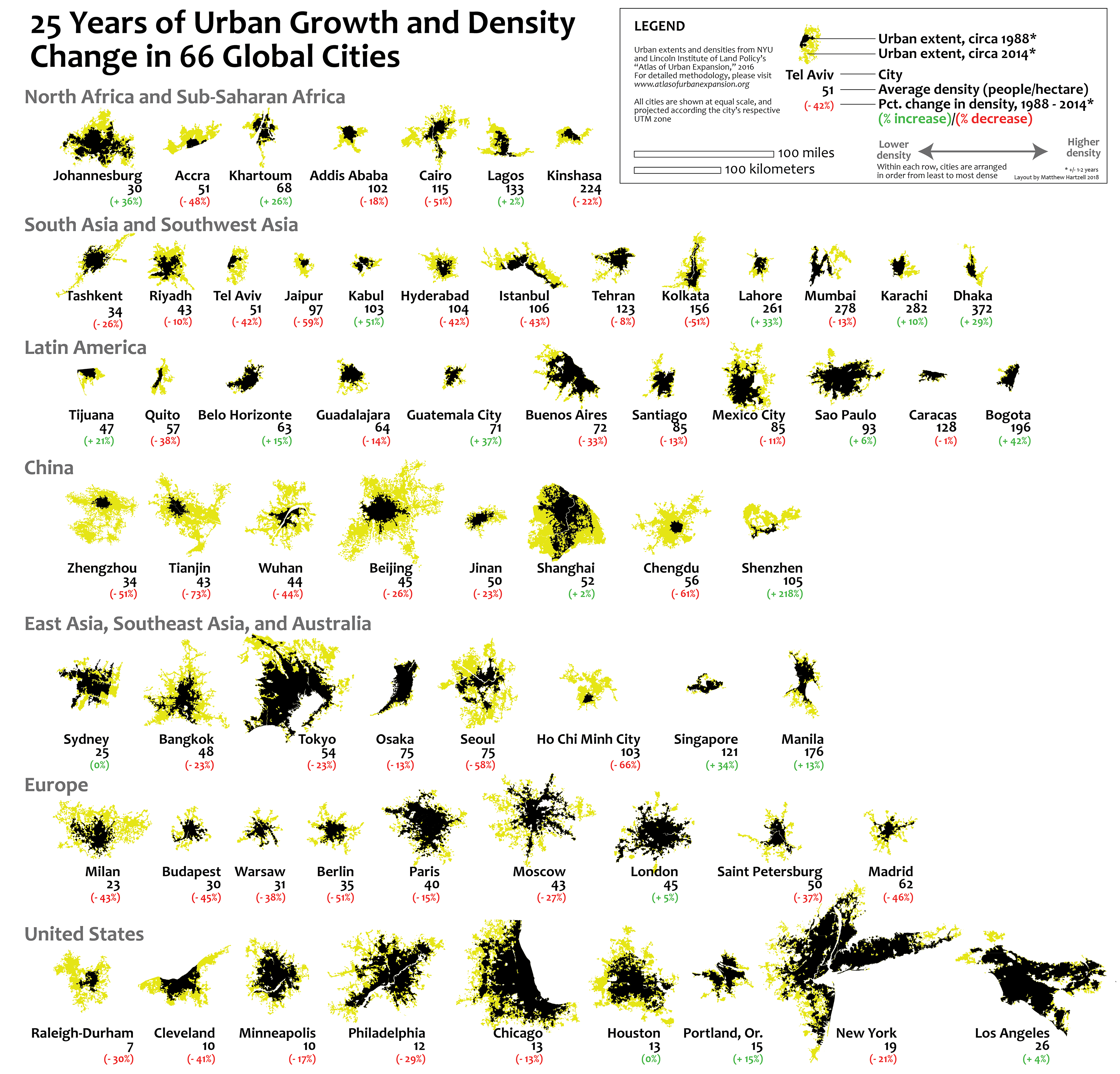 The 66 cities in this visualization are shown at the same scale, allowing the viewer to easily compare city sizes. The cities are also grouped in rows by world region.

The important note of clarification: the “urban extents” shown here do not represent their respective cities as traditionally defined by administrative boundaries. Rather, they represent the contiguous built-up urbanized area of each city’s respective metropolitan region. This contiguous built-up urbanized area was determined through satellite imagery analysis (not by me, but by the Lincoln Land Institute who published the dataset I used to make this). It’s important to note that this definition includes very low-density suburbs. It even includes some undeveloped or rural/agricultural land, if that rural land is surrounded by or within a certain distance of the actual urbanized built-up area (www.atlasofurbanexpansion.org has detailed explanations of the algorithms and methodology used to create this dataset).

Each city is a shown in two colors, where black equals the urban extent circa 1988 and yellow equals the urban extent circa 2014 (due to data availability, the actual years range from 1986-1990 and 2012-2015, respectively). There is a trove of information contained within these two colors. They can tell us the scale, the shape, the direction, and the compactness of urban growth over the last quarter century. For example, some cities’ recent growth has been concentric, spreading out from the center like an expanding blob (Hyderabad, Chengdu), while other cities’ recent growth radiates out from the center along linear paths (Tashkent, Tehran, Moscow) which undoubtedly are built along transportation corridors. While the urban extent of most cities in the sample was relatively compact in 1988, in 2014 numerous cities appear “scattered or “perforated” around the edges, evidence of low-density suburban sprawl interfacing with the city’s rural periphery. Another caveat: the areas shown as “new urban extent” (yellow) are mostly new development, but they may also include some previously-existing towns, which were in 1988 considered separate from the urban region, but which have been “swallowed up” by the expanding city in the years since.

Some cities, such as Caracas, Osaka, and Los Angeles, appear almost entirely black, meaning the city’s physical extent has grown very little since 1988. This could be due to a number of reasons, from poor economic performance to geographical constraints such as mountains or water bodies. In the case of Los Angeles, rapid urban growth occurred in the early and mid 20th century, but by the end of the 20th century, there was little room left to expand other than around the fringes (Santa Clarita, Simi Valley, and the Inland Empire). On the other end of the spectrum, some cities appear mostly yellow. These are the cities that have expanded rapidly beyond their boundaries in 1988. It makes sense that cities in developing countries with high economic growth and growing urbanizing populations would see extensive physical expansion. But not all developing regions are physically expanding as fast as the rest. And none have grown as fast as China’s cities. The visualization clearly shows that Chinese cities have expanded faster than cities anywhere else in the world during the last 25 years. Beijing quadrupled in size; Chengdu grows by 10 times. Within the United States, we see different city regions expanding at different rates. Mature cities like Los Angeles and cities with policies such as Portland’s urban growth boundary have expanded much less than cities with lax land use controls like Houston, Raleigh-Durham, and Cleveland.

So far, we’ve only been looking at the physical size of cities. However, size alone tells us nothing about a city’s density (defined here as people per hectare, equal to 1/100 of a square kilometer, or roughly 2.5 acres). Tokyo and Chicago are of similar size but Tokyo fits more than 4 times as many people into the same area. If the population was held constant then an increase in a city’s physical area would correlate with a decrease in density (since density = population ÷ area). However, no city’s population remains constant. Whether a city sees an increase or decrease in its density depends on whether its population is increasing at a faster or slower rate than the city is physically expanding.

This is where we start to get some really interesting takeaways. For instance, although Los Angeles physically grew by 20% between 1988 and 2014, its population grew by 24%, thus resulting in a small net increase in density of 4%. Shenzhen’s physical area has grown sixfold since 1988, but its population grew twenty-fold, leading to a more than doubling of density. But in China, Shenzhen is the exception, not the rule. Chinese cities used to have densities similar to other East Asian cities. And while most other East Asian cities have seen declines in density over the last 25 years (Singapore and Manila being exceptions), none have seemed declines as steep as China’s. Just today the New York Times had a story about the growing pains facing Tianjin, which built whole new city districts from scratch only to see them sit idle. It shouldn’t then come as a huge surprise that out of the 66 cities in this sample, Tianjin saw the biggest drop in density, to the point that it’s now less dense than western cities like London and Madrid.

Turning to the United States, it seems crazy that cities like Raleigh-Durham, which was already very low density, to begin with, has seen an additional 30% decline in density since 1988. Clearly, whatever benefits were brought by “new urbanist” urban infill projects in downtown Raleigh-Durham have been offset by extreme low-density suburban sprawl. New York is associated with “high density” in most people’s minds because of the Manhattan skyline, but the region as a whole has seen a more than 20% decline in density, and the culprit is the same as in Raleigh-Durham: suburban sprawl around the edges. Houston is an interesting case. Although it has seen significant sprawl, its density has actually remained even over the years, suggesting that its population growth and urban expansion have remained in balance.

Some final takeaways. People in my profession (urban planning) love to evangelize about the benefits of density. But few people actually know how to talk about density or know how the density of one city actually compares with that of another. By placing 66 diverse cities side-by-side, along with their density score, I’ve tried to make those comparisons more natural. Most people don’t know what “40 people per hectare” actually means, but if you can put a name to that density (e.g. “Paris”) it’s easier to visualize. The cities in this sample range from 7 people per hectare (Raleigh-Durham) to 372 (Dhaka). Most people, even planners, would agree that 372 people per hectare are probably not ideal. Then what is the ideal? Something between 54 (Tokyo) and 106 (Istanbul) seems reasonable. But what if I told you that there are whole sections of American cities (not just New York but Los Angeles) that are just as dense as Mexico City (85), Lagos (133), or even Karachi (282). That’s because density, as actually lived, varies from neighborhood to neighborhood, and this visualization masks a whole lot of variation beneath the surface by averaging density across the entire metro region.

And yet, the average density is still a useful metric, and the best way to make city-to-city comparisons. American cities need to get their density trend lines out of the red, like Portland and Los Angeles have done. But before a whole bunch of people start saying I’m crazy, that “Los Angeles is already too crowded,” let me say that transportation is a whole other beast that I haven’t dealt with here. LA is doing better at increasing density than most US cities, but it also has terrible traffic. A reason for this is that LA has been adding urban infill, but that outdated policies require developers to provide so many parking spaces with every unit, which in turn encourages people to drive more and eats up space that could have been used for more housing. Adding more density can bring tremendous benefits (increased walkability, activity, and transit ridership) but if every new person drives a car, then increased density will bring increased traffic. Density and public transportation go hand in hand and must be pursued concurrently.