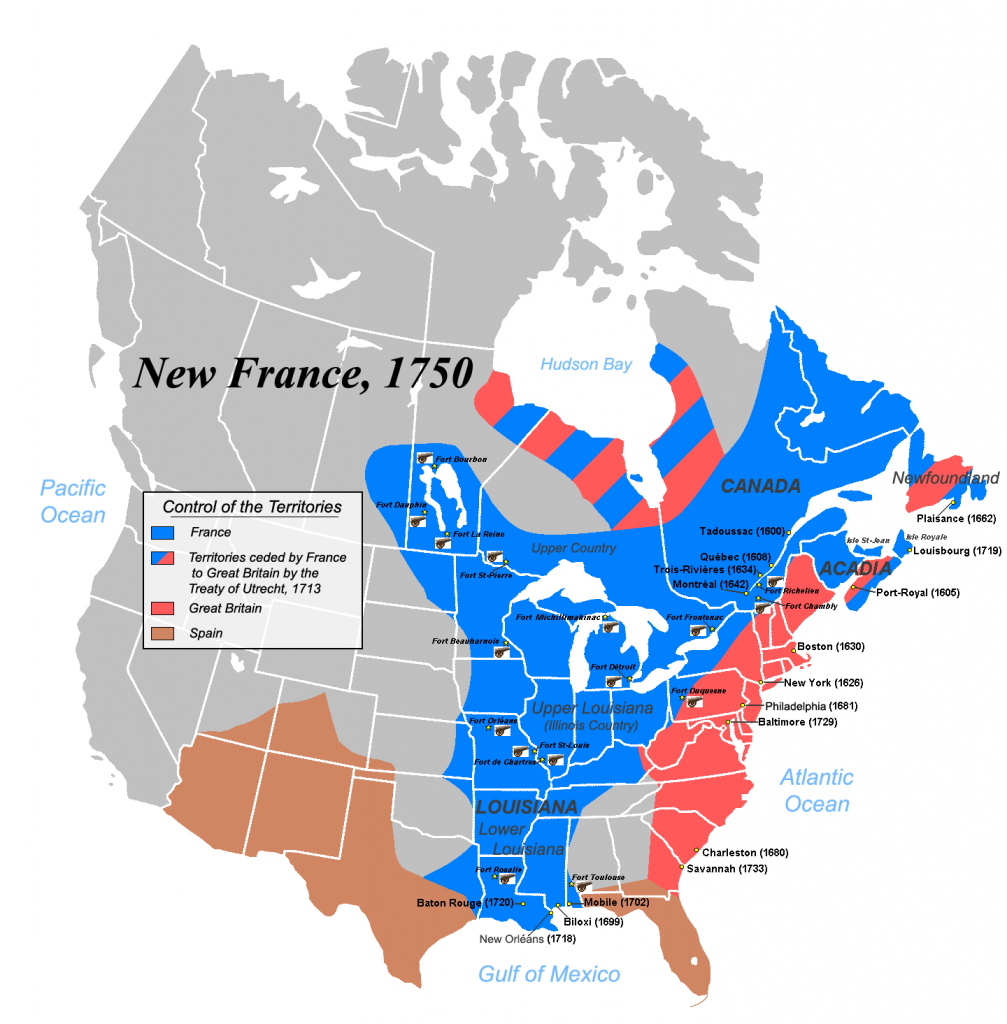 New France was the area colonized by France in North America during a period beginning with the exploration of the Gulf of Saint Lawrence by Jacques Cartier in 1534 and ending with the cession of New France to Great Britain and Spain in 1763.

At its peak in 1712, the territory of New France, also sometimes known as the French North American Empire or Royal New France, consisted of five colonies, each with its own administration: Canada, Hudson’s Bay, Acadia, Newfoundland, and Louisiane.

Thus, it extended from Newfoundland to the Canadian prairies and from Hudson Bay to the Gulf of Mexico, including all the Great Lakes of North America.

The Treaty of Utrecht resulted in France relinquishing its claims to mainland Acadia, the Hudson Bay and Newfoundland to England. France established the colony of Île Royale, now called Cape Breton Island, where they built the Fortress of Louisbourg. Acadia had a difficult history, with the English causing the Great Upheaval. This has been remembered on July 28 each year since 2003. Their descendants are dispersed in the Maritime Provinces of Canada, and in Maine and Louisiana in the United States, with small populations in Chéticamp, Nova Scotia, and the Magdalen Islands. Some also went to France.

In the sixteenth century, the lands were used primarily to draw from the wealth of natural resources. In the seventeenth century, successful settlements began in Acadia, and in Quebec by the efforts of Champlain. By 1765, the population of the new Province of Quebec reached approximately 70,000 settlers.

In 1763, France had ceded the rest of New France, except the islands of Saint Pierre and Miquelon, to Great Britain and Spain at the Treaty of Paris, which ended the Seven Years’ War. Britain received Canada, Acadia, and the parts of French Louisiana which lay east of the Mississippi River – except for the Île d’Orléans, which was granted to Spain, along with the territory to the west – the larger portion of Louisiana.

In 1800, Spain returned its portion of Louisiana to France under the secret Treaty of San Ildefonso. However, French leader Napoleon Bonaparte, in turn, sold it to the United States in the Louisiana Purchase of 1803, permanently ending French colonial efforts on the North American mainland.

New France eventually became absorbed within the United States and Canada, with the only vestige remaining under French rule being the tiny islands Saint Pierre and Miquelon. In the United States, the legacy of New France includes numerous placenames as well as small pockets of French-speaking communities. In Canada, institutional bilingualism and strong Francophone identities are arguably the most enduring legacy of New France. The conquest is viewed differently among Francophone Canadians, and between Anglophone and Francophone Canadians.