The Colours of Food Security
Food security is a highly complex issue requiring a systems view that integrates multiple dimensions and aspects of the food system. Food availability, quality, access, utilization, and the stability of each of these components, all depend on agricultural production, employment, poverty, economic growth, climate, human health, biodiversity loss, water, pollution, consumption, and societal norms. With the maps we have given you, we have shown you what food security looks like today. Paint the food system you would like to see tomorrow. 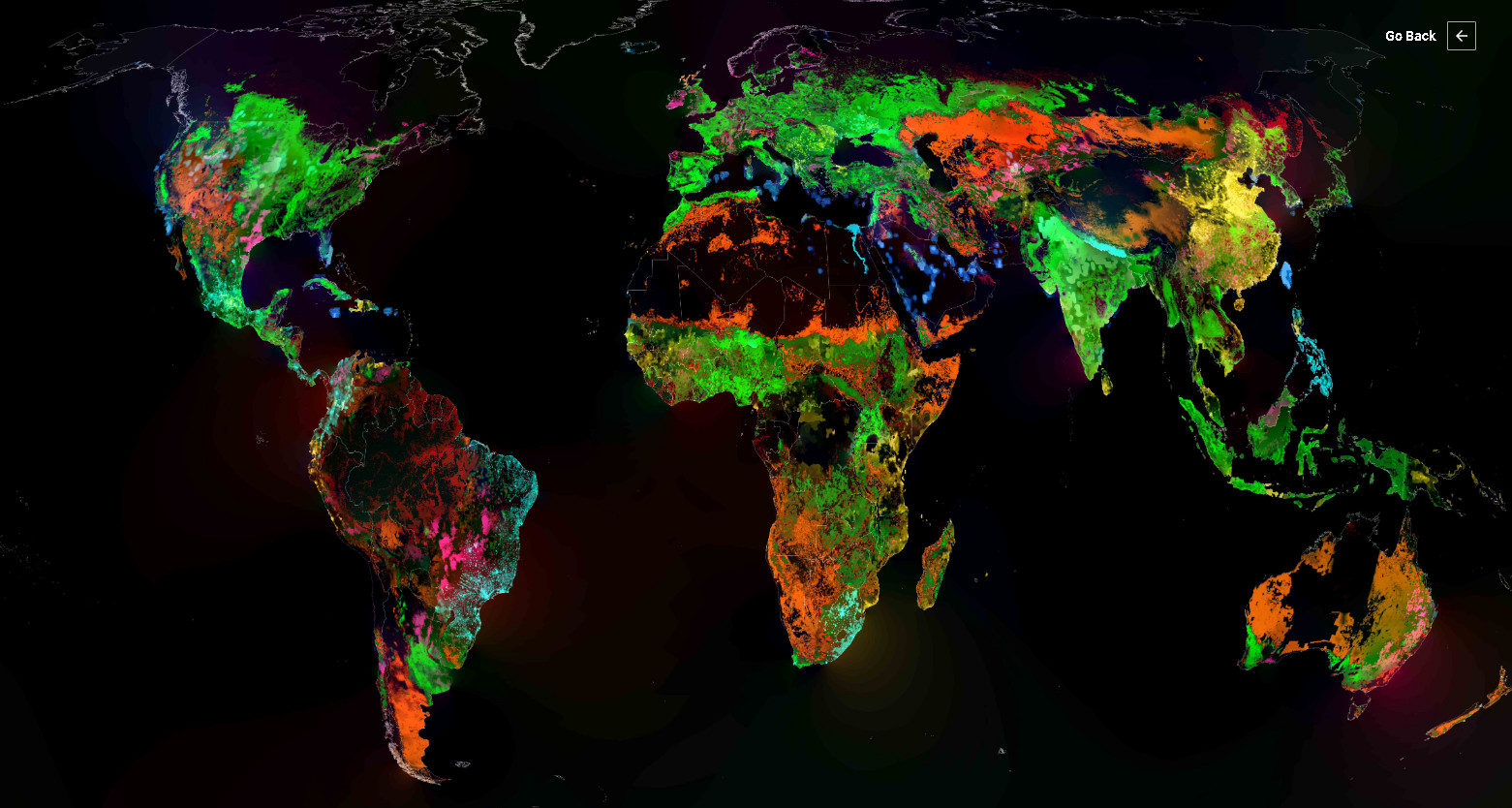 A Cultivated Planet
Each pixel on the map highlights the areas covered by croplands and pastures across the world. Humans have converted ~12% of the earth’s ice-free land surface area to grow crops, fuel, and fiber, and ~22% for grazing cattle, pigs, goats, sheep, chickens, and other forms of livestock. Agriculture represents the largest human land footprint on the planet. Rising demand for agricultural products is currently straining the Earth’s life-supporting systems. 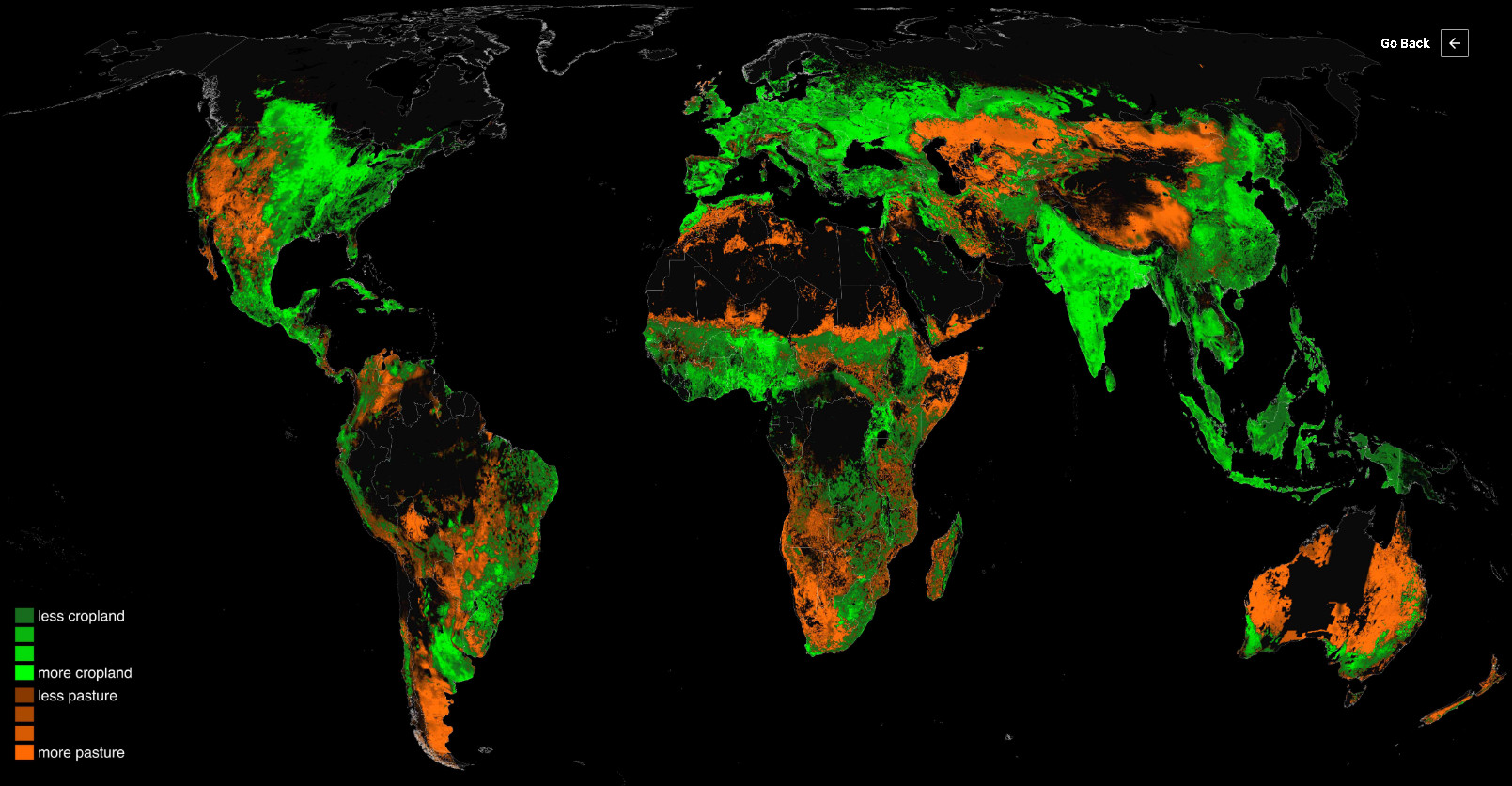 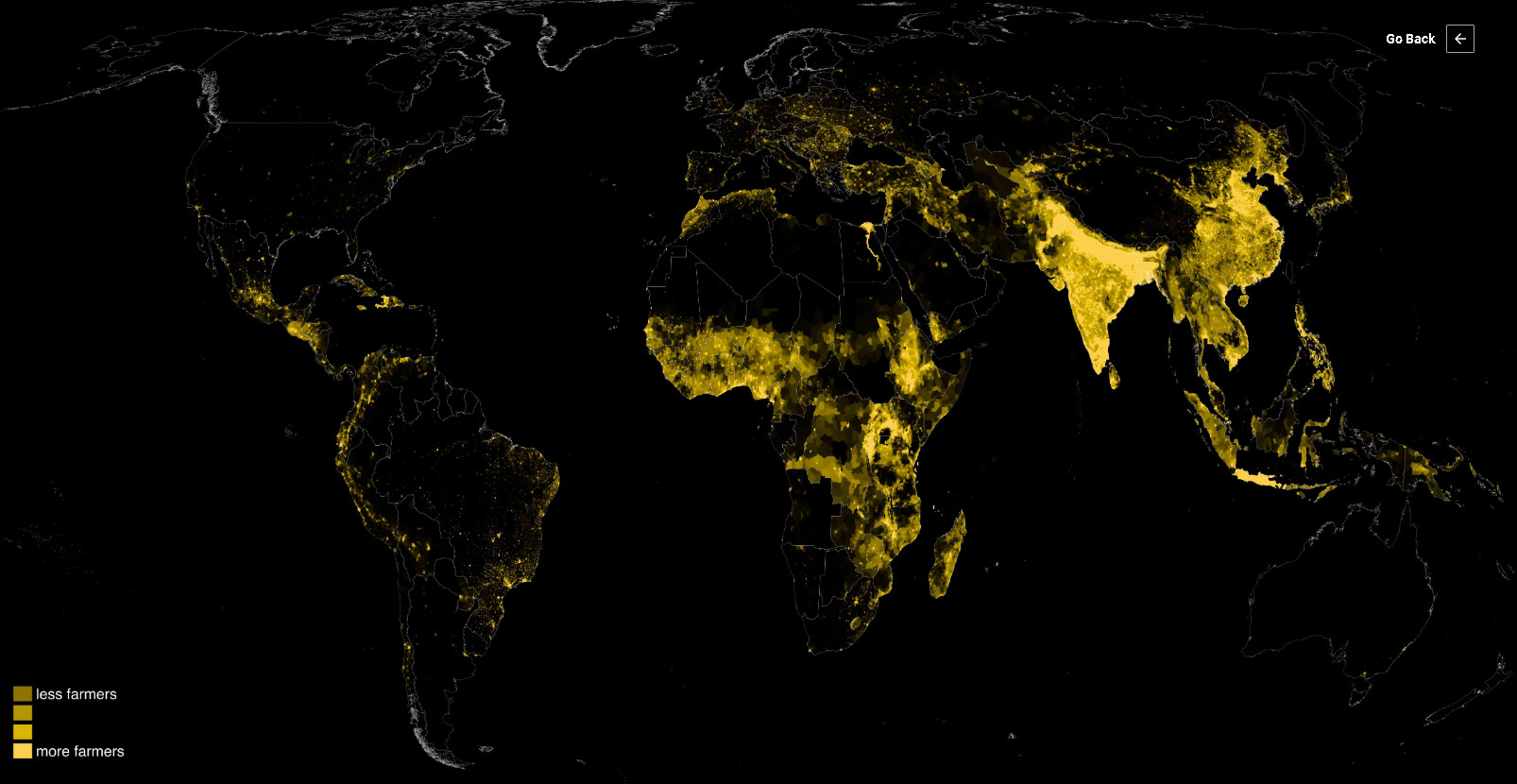 World Hunger
Each pixel on the map highlights the number of undernourished humans on the planet. One in ten people on the planet today do not have enough calories to support a basic, energetically non-demanding lifestyle. One in four do not get enough of the right nutrients from their food, such as Iron and Vitamin A. Lack of proper nutrition has drastic impacts on child mortality, health, and intellect. While the proportion of undernourished people across the world has declined over the past few decades, the proportion of people who consume in excess has risen dramatically, and in absolute numbers now is almost double those of undernourished. 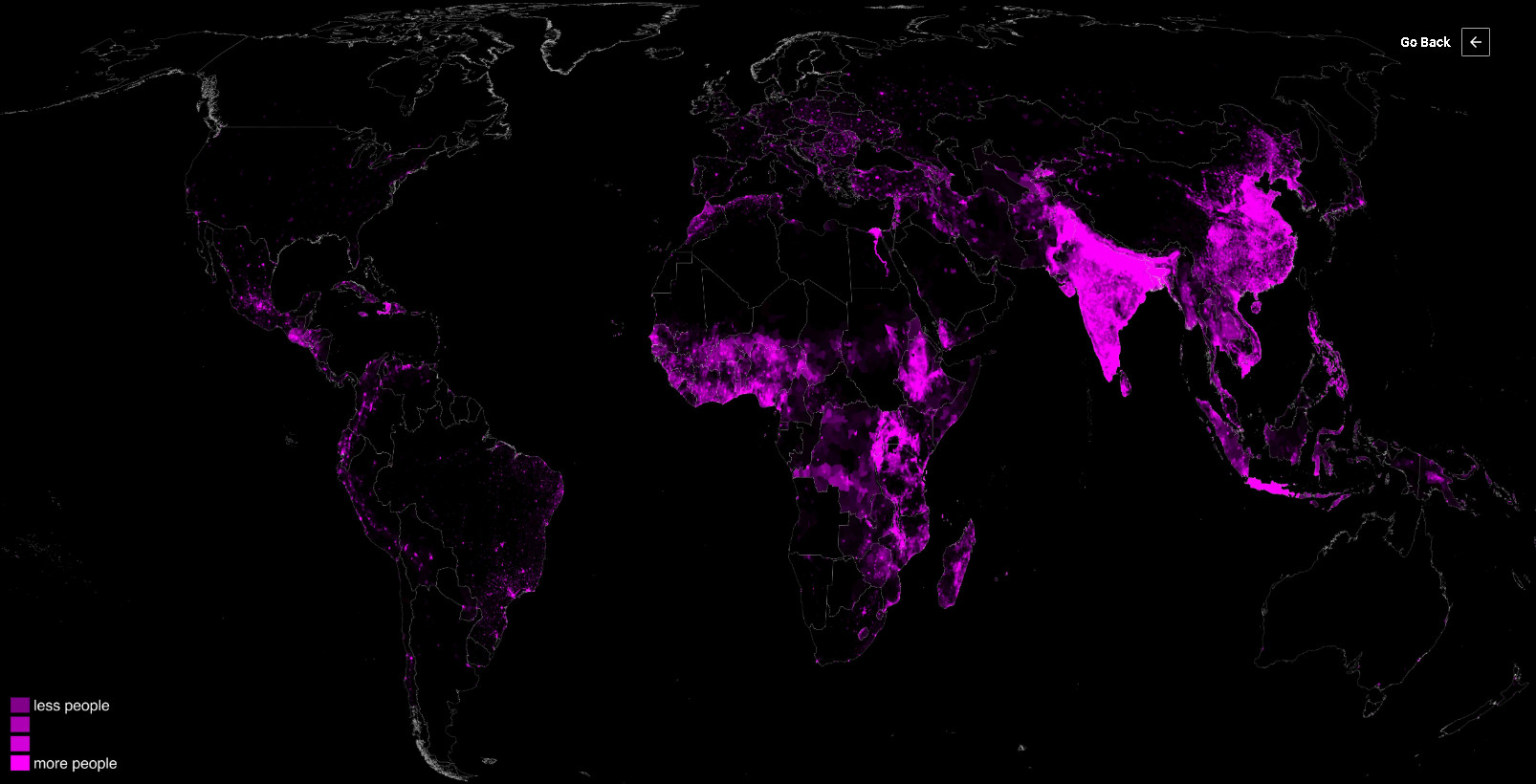 Water Consumption
Each pixel on the map highlights the quantity of groundwater extracted in different watersheds across the world. Agricultural production accounts for ~92% of the human water footprint. As a consequence, many aquifers around the world are rapidly being depleted, some large lakes and inland seas have dried out, and many rivers no longer reach the oceans. This means that agriculture is a major factor leading to water insecurity for human populations and for other species on our planet. 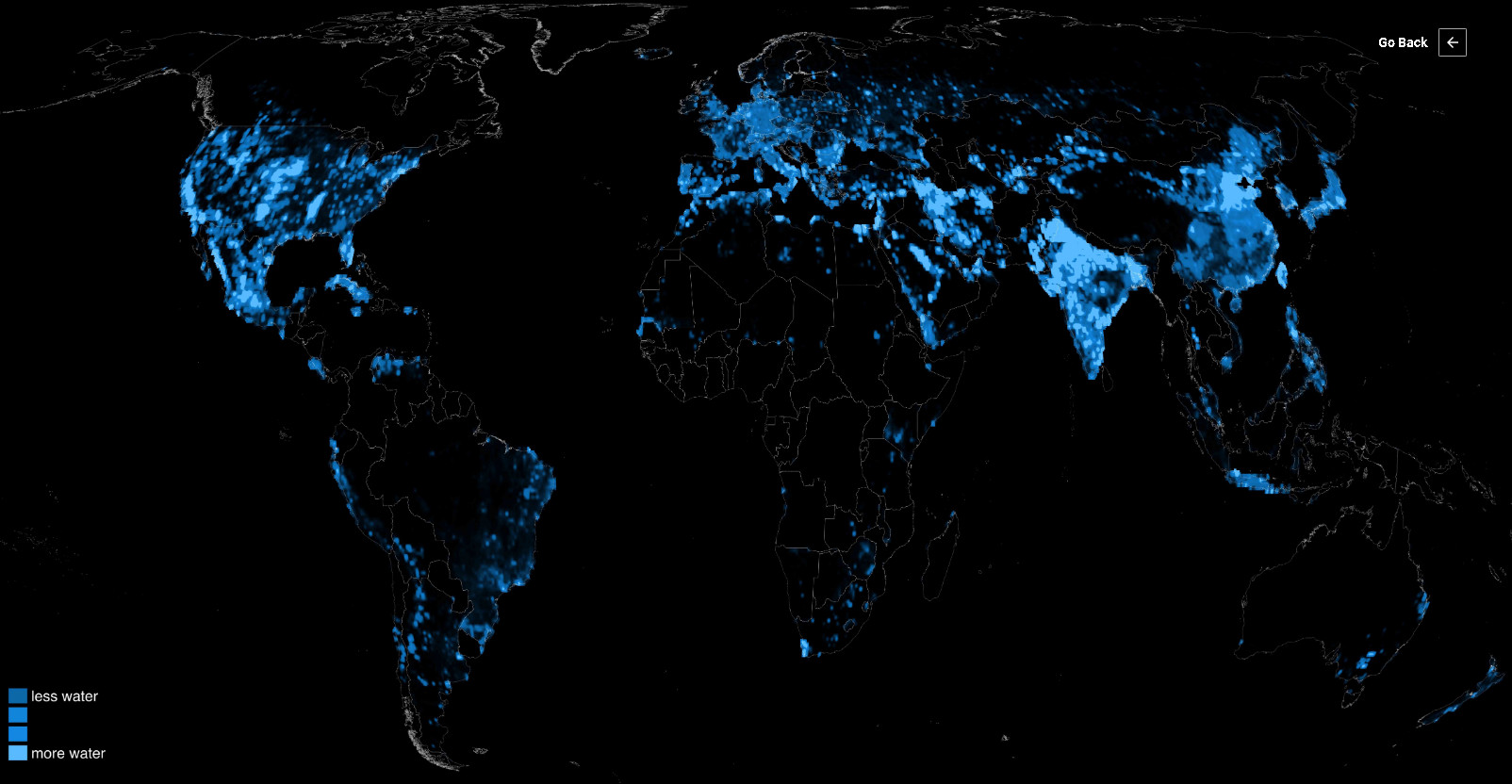 Pollution
Each pixel on the map highlights the amount of excess phosphorus applied to croplands across the world. Fertilizers from agriculture, including synthetic, animal-based (e.g. manure), and plant-based (e.g. legumes), have enabled global agricultural productivity to soar over the past 50 years. However, the use of these fertilizers is often in excess. Phosphorus is a key ingredient in many fertilizers, and its over-application has negatively impacted our freshwater systems through widespread eutrophication. Excess nitrogen often applied alongside phosphorus, has also come at a great cost to human health through pollution of drinking water.

Biodiversity Loss
Each pixel on the map highlights the number of threatened mammal and bird species whose ranges overlap with pasture or cropland ecosystems. Agriculture is responsible for clearing ~30% of forests worldwide, resulting in ~35% loss of local species richness. The dominance of agricultural land use makes it especially difficult for species with large distributions to co-exist with humans on the planet. Loss of biodiversity, in turn, causes a decline in nature’s contributions to people, such as pollination and pest control services, which lead to reduced agricultural productivity. 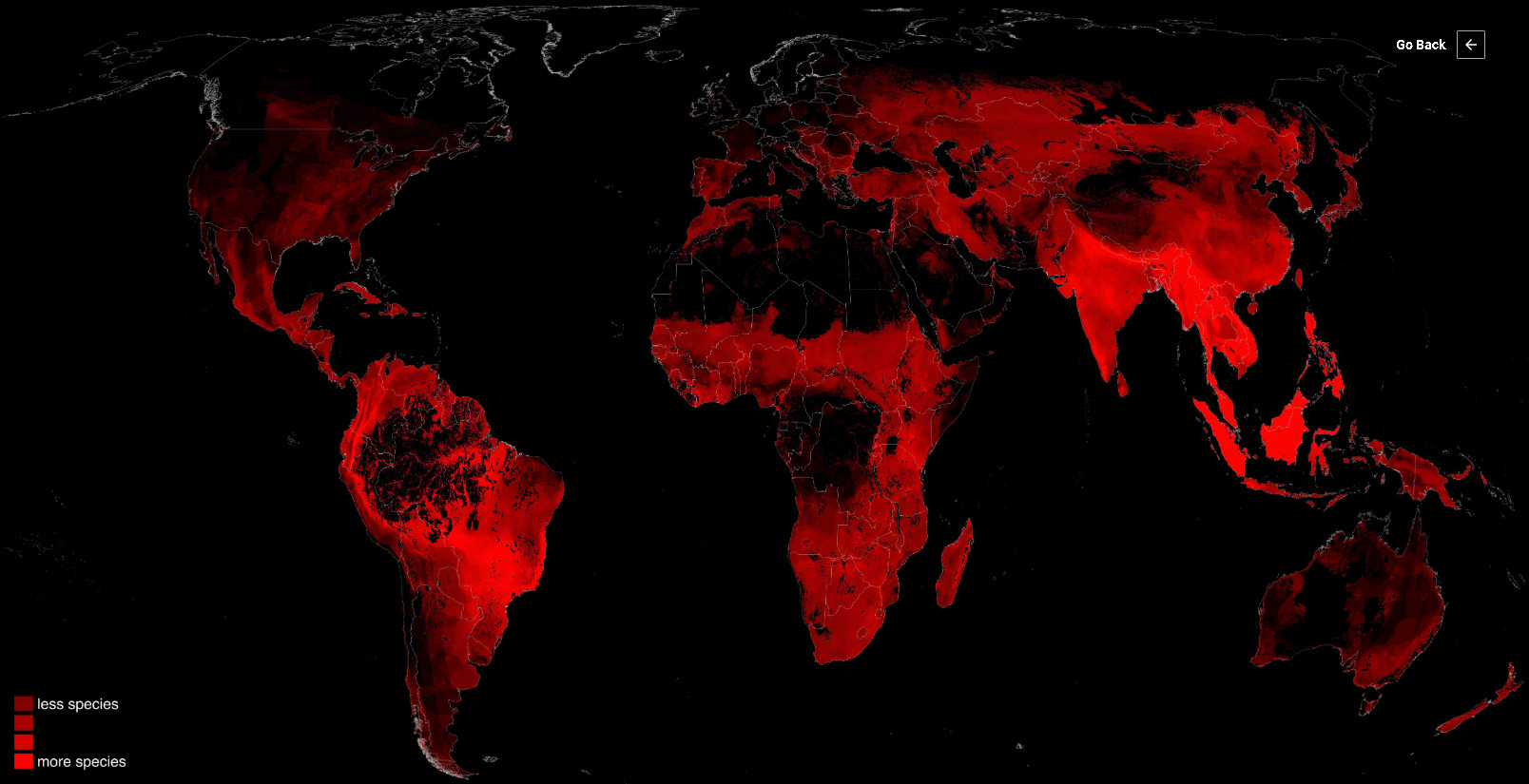 Waste
Each pixel on the map shows the percentage of food that is wasted in each country. For mapping, we only highlight dense human populations in each country (>1000 people per pixel). Currently, ~25% of the world’s food produced globally is never consumed. Food waste occurs in the field, after harvest, along with supply chains, and among retailers and consumers. Waste due to consumers is much higher in European and North American countries, while waste in the field occurs predominantly in African, South Asian, and Southeast Asian countries. Reducing total food waste is a major leverage point towards a sustainable food system. 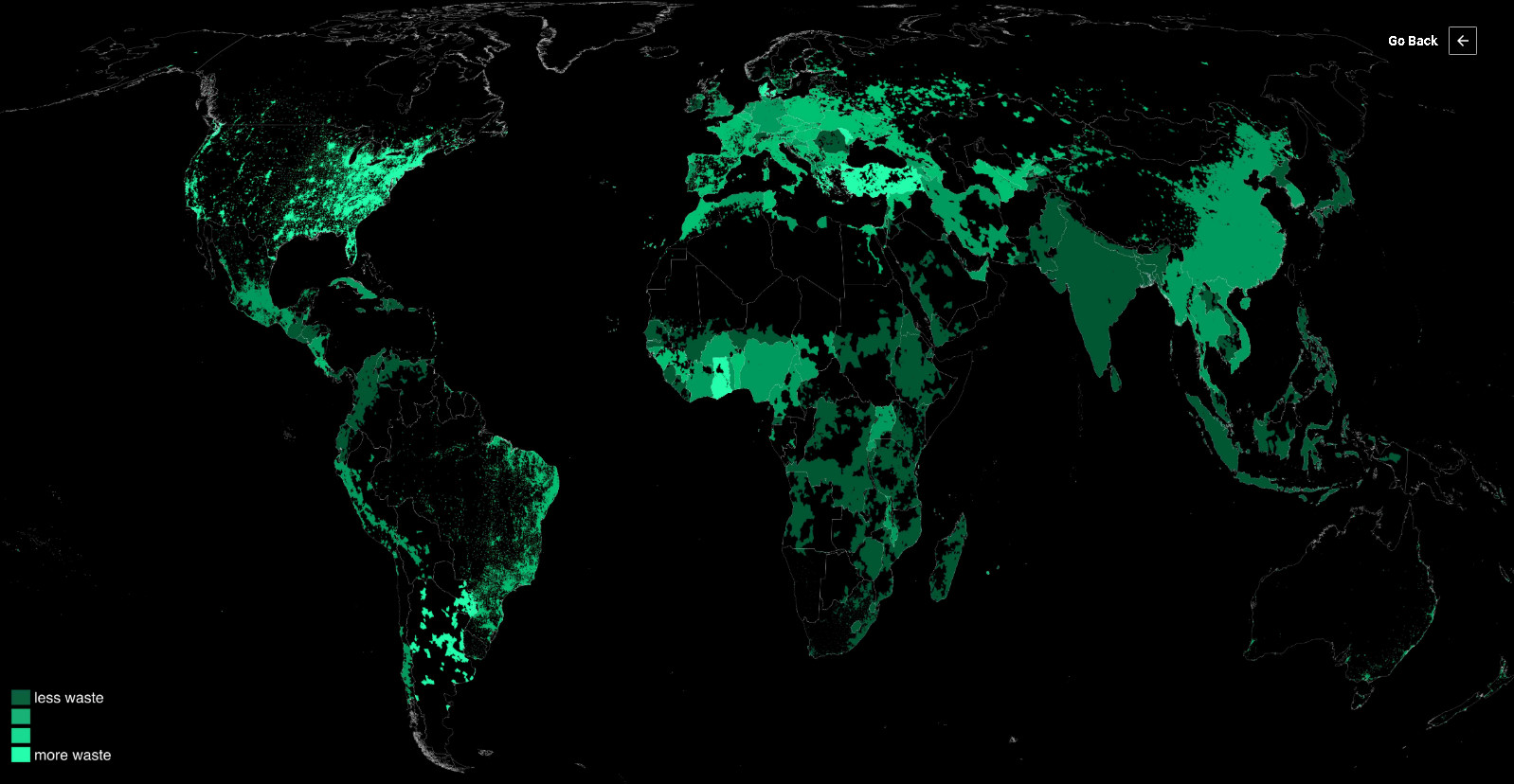 Diet Shifts
Each pixel on the map highlights the number of calories produced that are currently being used to feed livestock (in total this is ~36% of all calories produced by crops globally). The world is currently facing a series of interconnected problems related to the food system including malnutrition, environmental impacts, non-communicable and communicable diseases. One proposed solution to these problems is to shift dietary trends away from grain-fed animal products. This would free up ~70% more calories, meet human energy requirements and reduce the impact of agriculture on the environment and human health. 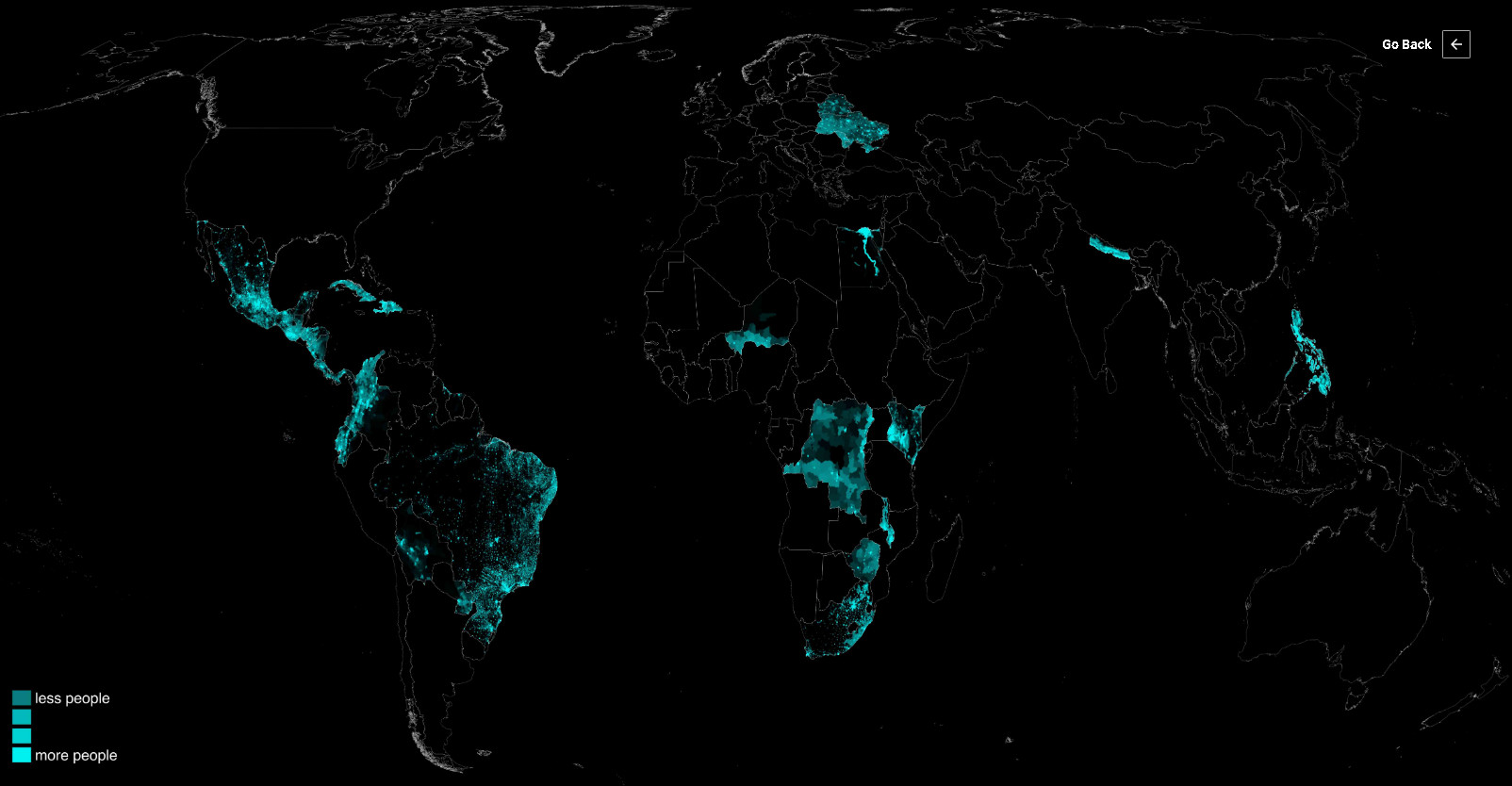