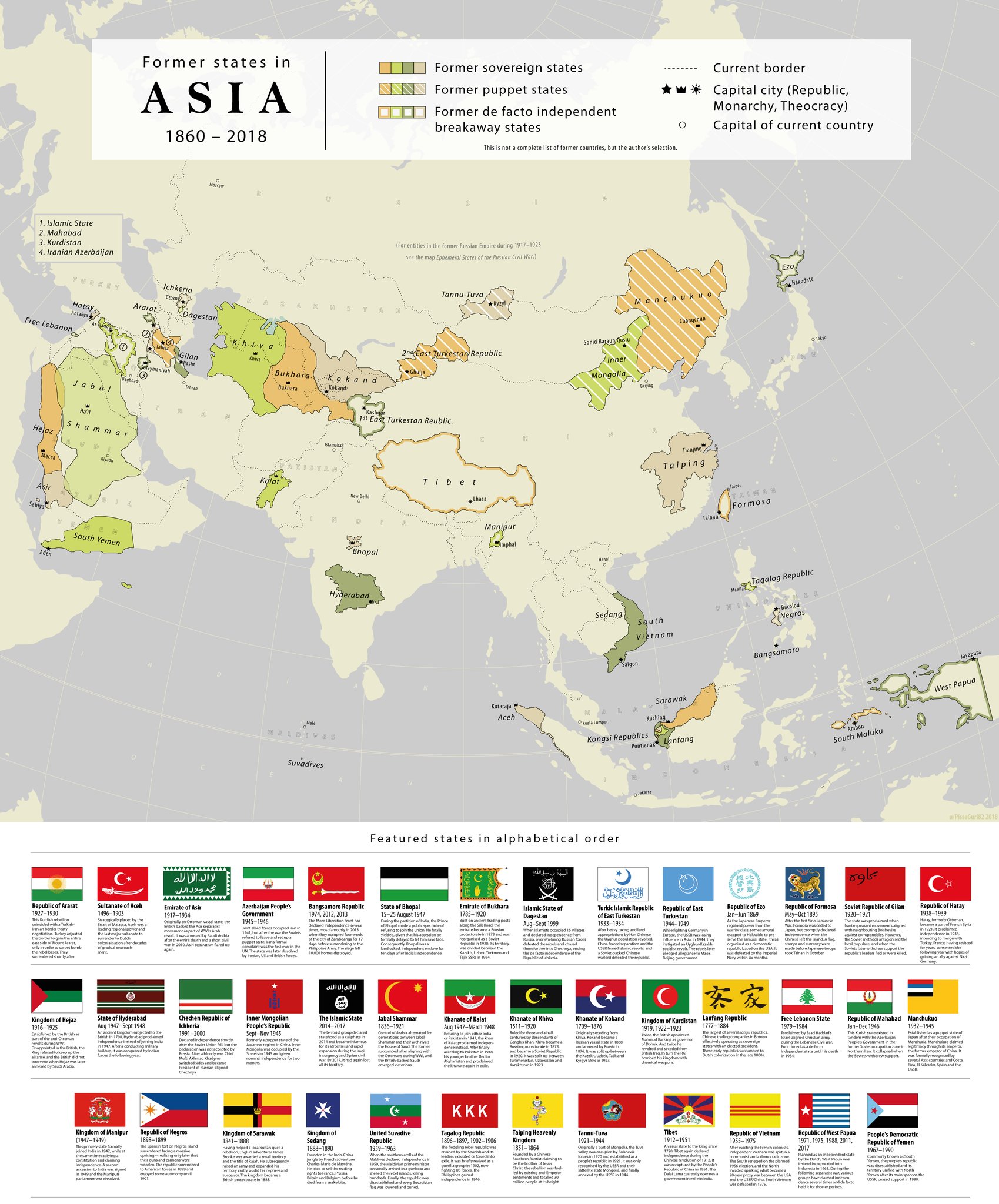 Republic of Ararat
1927-1930
This Kurdish rebellion coincided with a Turkish-Iranian border treaty negotiation. Turkey adjusted the border to gain the entire east side of Mount Ararat, only in order to carpet bomb the rebel bases. They surrendered shortly after.

Sultanate of Aceh
1496-1903
Strategically placed by the Strait of Malacca. Aceh was a leading regional power end the last major sultanate to surrender to Dutch colonization after decades of gradual encroachment.

Emirate of Asir
1917-1934
Originally an Ottoman vassal state, the British backed the Asir separatist movement as part of WWs Arab revolt. It was annexed by Saudi Arabia alter the emir death and a short civil war. In 2010  Asir separatism flared up again.

Azerbaijan People’s Government
1945-1946
Joint allied forces occupied Iran in 1941 but after the war, the Soviets refused to leave and set up a puppet state. Iran’s formal complaint was the first ever in the UN. The State was later dissolved by Iranian, US and British forces.

Bangsamoro Republic
1974, 2012, 2013
The Mono Liberation front has declared independence several times, most famously in 2013 when they occupied four wards of the city of Zamboanga for 17 days before surrendering to the Philippine Army. The siege left 10.00-0 homes destroyed.

State of Bhopal
15-25 August 1947
During the partition of India, the Prince of Bhopal made a public spectacle of refusing to join the union. He finally yielded, given that this accession is formally delayed to let him save face. Consequently, Bhopal was a landlocked independent enclave for ten days after India’s Independence.

Emirate of Bukhara
1785-1920
Built on ancient trading posts along the Silk Road, the emirate became a Russian protectorate in 1873 and was reorganized as the Soviet Republic in 1920. Its territory was divided between the Kazakh, Uzbek, Turkmen and Tajik SSR in 1924.

Islamic State of Dagestan
Aug-Sept 1999
When Islamists occupied 15 villages and declared independence from Russia, overwhelming Russian forces defeated the rebels and chased them further into Chechnya, ending the de facto independence of the Republic of Ichkeria.

Republic of East Turkestan
1944-1949
While fighting Germany in Europe, the USSR was losing influence in Asia. In 1944 they instigated an Uyghur-Kazakh socialist revolt. The rebels later pledged allegiance to Mao’s Beijing government.

Republic of Ezo
Jan-Jun 1869
As the Japanese Emperor regained power from the warrior class, some samurai escaped to Hokkaido lo preserve the samurai state. It was organized as a democratic republic based on the USA. It was defeated by the Imperial Navy within six months

Republic of Formosa
May-Oct 1895
After the first Sino-Japanese War. Formosa was ceded to Japan but promptly declared independence when the Chinese left the Island. Flag slumps and currency were made before Japanese troops took Tainan in October.

Soviet Republic of Gilan
1920-1921
The state was proclaimed when Iranian peasant movements aligned with neighboring Bolsheviks against corrupt nobles. However, the Soviet methods antagonized the local populace, and when the Soviets later withdrew support the republic’s leaders fled or were killed.

Republic of Hatay
1938-1939
Hatay, formerly Ottoman, became a part of French Syria in 1921. It proclaimed independence in 1938, intending to merge with Turkey. France, having resisted for years, consented the following year with hopes of gaining an ally against Nazi Germany.

Kingdom of Hejaz
1916-1925
Established by the British as part of the anti-Ottoman revolts during WW1. Disappointed in the Britsh, the King refused to keep up the alliance, and the British did not intervene when Hejaz was later annexed by Saudi Arabia

State of Hyderabad
Aug 1947-Sept 1948
An ancient kingdom subjected to the British In 1796. Hyderabad proclaimed independence instead of joining India in 1947. After a conducting military buildup, it was conquered by Indian forces the following year.

Chechen Republic of Ichkeria
1991-2000
Declared independence shortly after the Soviet Union fell, but the declaration was not accepted by Russia. After a bloody war, Chief Mufti Akhmad Kadyrov switched sides and became President of Russian-aligned Chechnya

Inner Mongolian People’s Republic
Sept-Nov 1945
Formerly a puppet state of the Japanese regime in China. Inner Mongolia was occupied by the Soviets in 1945 and given nominal independence for two months.

The Islamic State
2014-2017
The terrorist group declared statehood as a caliphate in 2014 and became infamous for its atrocities and rapid expansion during the Iraq insurgency and Syrian civil war by 2017, it had again lost all its territory

Jabal Shammar
1836-1921
Control of Arabia alternated for generations between Jabal Shammar and their arch rivals the House of Saudi. The former succumbed after aligning with the Ottomans during WWl and the British backed Sauds emerged victoriously.

Khanate of Kalat
Aug 1947-March 1948
Refuting to join either India or Pakistan in 1947, the Khan of Kalat proclaimed independence instead. After finally acceding to Pakistan in 1948, his younger brother fled to Afghanistan and proclaimed the khanate again in exile.

Khanate of Khiva
1511-1920
Ruled for three and a half centuries by descendants of Genghis Khan. Khiva became a Russian protectorate in 1873 and became the Soviet Republic in 1920. It was split up between Turkmenistan, Uzbekistan, and Kazakhstan in 1923.

Khanate of Kokand
1709-1876
Originally seceding from Khiva. Kokand became a Russian vassal state in 1868 and annexed by Russia in 1876. It was split up between the Kazakh, Uzbek, Tajik and Kyrgyz SSRs in 1923.

Kingdom of Kurdistan
1919, 1922-1923
Twice the British appointed Mahmud Barzanji as governor of Dohuk. And twice he revolted and seceded from British Iraq. In turn, the RAF bombed his kingdom with chemical weapons.

Lanfang Republic
1777-1884
The largest of several Kangui republics. Chinese trading compares in Borneo effectively operating as sovereign states with an elected president. These early republics succumbed to Dutch colonization in the late 1800s

Free Lebanon State
1979-1984
Proclaimed by Saad Haddad’s Israel-aligned Christian army during the Lebanese Civil War. Functioned as a de facto independent state until his death in 1984.

Republic of Mahabad
Jan-Dec 1946
This Kurdish slate existed in tandem with the Azerbaijan People’s Government In the former Soviet occupation zone in Northern Iran. It collapsed when the Soviets withdrew support.

Manchukuo
1932-1945
Established as a puppet state of Japan after their occupation of Manchuria. Manchukuo claimed legitimacy through its emperor, the former emperor of China. It was formally recognized by several Axis countries and Costa Rica, El Salvador, Spain, and the USSR.

Kingdom of Manipur
1947-1949
This princely state formally joined India in 1947, while at the same time ratifying a constitution and claiming independence. The second accession to India was signed in 1949 and the Maripuri parliament was dissolved.

Republic of Negros
1898-1899
The Spanish fort on Negros Island surrendered facing a massive uprising – realizing only later that their guns and cannons were wooden. The republic surrendered to American forces in 1899 and enjoyed some autonomy until 1901.

Kingdom of Sarawak
1841-1888
Having helped a local sultan quell a rebellion. English adventurer James Brooke was awarded a small territory and the title of Rajah. He subsequently raised an army and expanded his territory vastly, as did his nephew and successor. The kingdom became a British protectorate in 1888.

Kingdom of Sedang
1888-1890
Founded in the Indo-China jungle by French adventurer Marie-Charles David de Mayrena. He tried to sell the trading rights to France, Prussia, Britain, and Belgium before he died from a snake bite.

United Suvadive Republic
1959-1963
When the southern atolls of the Maldives declared independence in 1959, the Maldives prime minister personally arrived in a gunboat and shelled the rebel islands, killing hundreds. Finally, the republic was disestablished and every Suvadivian flag was lowered and buried.

Tagalog Republic
1896-1897,1902-1906
The fledgling rebel republic was crushed by the Spanish and its leaders executed or forced into exile. It was briefly revived as a guerrilla group in 1902, now fighting US forces. The Philippines gained independence in 1946.

Taiping Heavenly Kingdom
1851-1864
Founded by a Chinese Southern Baptist claiming to be the brother of Jesus Christ, the rebellion was fuelled by existing anti-Emperor sentiments and totaled 30 million people at its height.

Tannu-Tuva
1921-1944
Originally a part of Mongolia, the Tuva valley was occupied by Bolshevik forces in 1920 and established as a peoples republic in 1921. It was only recognized by the USSR and their satellite state Mongolia and finally annexed by the USSR in 1944.

Tibet
1912-1951
A vassal state to the Qing since 1720, Tibet again declared independence diving the Chinese revolution of 1912. It was recaptured by the People’s Republic of China in 1951. The Dalai Lama currently operates a government in exile in India.

Republic of Vietnam
1955-1975
After evicting the French colonists, independent Vietnam was split between a communist and a democratic zone. The South reneged on the planned 1956 election, and the North invaded sparking what became a 20-year proxy war between the USA and the USSR/China. South Vietnam was defeated in 1975.

Republic of West Papua
1971, 1975, 1988, 2011, 2017
Planned as an independent state lay the Dutch, West Papua was instead incorporated into Indonesia in 1963. During the following separatist war, various groups have claimed independence several times and de facto held it for shorter periods

People’s Democratic Republic of Yemen
1967-1990
Commonly known as South Yemen, the people’s republic was disestablished and its territory unified with North Yemen after its main sponsor, the USSR ceased support in 1990.